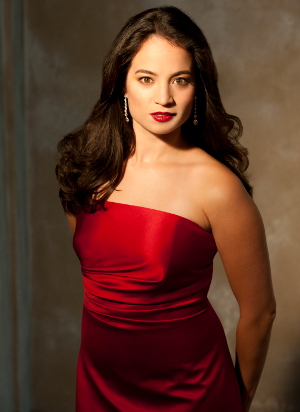 Samantha Dango Blossey is recognized throughout the United States as a versatile performer in opera, operetta, and musical theater. She has performed at such spaces as Carnegie Hall, Symphony Space, Don’t Tell Mama, and 54 Below. She was a finalist for the Peter Elvins Vocal Competition and a second place winner in the International Gilbert and Sullivan Festival. Ms. Blossey has sung with Opera Delaware, Portland Opera, New Jersey State Opera, Natchez Festival of Music, Boheme Opera, Light Opera of New Jersey, Princeton Festival and the State Repertory Opera of New Jersey. Ms. Blossey also premiered the role of Paulina (Il Racconto D’Inverno) in the United States with the International Opera Theater.

Recently, Ms. Blossey performed alongside the 6-time Grammy award winning band The Chieftains at the McCarter Theater. She performed the role of Adina in Donizetti’s L’elisir d’amore with Quisisana Resort as well as appearing as a soloist in their Concert Nights. She also returned to Don’t Tell Mama this winter performing in the Holiday Happy Hour with the Gimlets cabaret.

Samantha acts as a soloist for non-profit organizations such as the Susan G Komen for the Cure and the Relay for Life. She also appears regularly as the National Anthem singer for the New Jersey Devils at the Prudential Center in Newark, N.J. She is currently on the roster with Wade Artist Management.